We have moved our Victorian Store. Come Visit us at our new address 390 Mt Alexander Rd Ascot Vale. Just 900m from the Old Shop

Whenever Roland release a new range of digital pianos, there is always plenty of excitement... and it’s always with plenty of reasons! 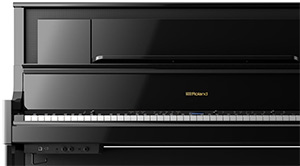 Whenever Roland release a new range of digital pianos, there is always plenty of excitement... and it’s always with plenty of reasons! Having lived through many of the generations of the Home Piano range, I have watched them develop new tech that is used to improve the performance of these wonderful instruments.

Roland is one of the few companies to mix American and European grand piano sounds by sampling the worlds best known brands at the highest quality available. PureAcoustic modelling replaces the previous Supernatural modelling - a first in its class . Supernatural blended the worlds of sampled sound and digital modelling and PureAcoustic picks up where supernatural left off to digitally re-create the way that acoustic pianos produce sound.

Modelling is a far more advanced technique rather than the older sampling method, allowing for far greater control and expression giving you the same acoustic performance feel, directly from a digital piano - in real-time!

The new acoustic projection system in each of the LX700 models is designed to bring the piano cabinet to life. Each speaker and amplifier system is carefully designed and matched for each model shape and size to give you the ultimate performance in your home, so you can ensure you are getting a concert piano feel and sound. Don’t compromise your technique and don’t fall for the old adage that you can only perform at a concert or 8th grade level on an acoustic instrument . The Roland LX700 series pianos will take you all the way. From keyboard to pedal you will not lose an inch of performance or technique.

The Hybrid Grand Keybed that is embedded in the LX700 Series is an upgrade from the previous PHA50 which was the first to feature a wooden key exterior with plastic internal body. The keybed upgrades have allowed for precision and accuracy with every key stroke and fight against swelling and movement further into the pianos life. The new Hybrid Grand action follows in this footstep with some new upgrades to make your playing experience perfect.

As Roland have explained - "The pivot point on the black keys is 2cm further back than on the white keys, so they’re easier to press which avoids fatigue when you’ve been performing for long periods. Both the black and white keys are longer than you’d normally find on a digital piano, with the extra length reducing the weight difference between the key’s edge and its end. On top of this, all the keys include a stabilising pin to ensure smooth and precise vertical travel, avoiding the sideways key movement and noise of playing glissandos on some pianos. The result is a series of keyboards with the optimum balance of resistance, momentum and return movement, capable of anything – and everything". Ebony and ivory has long been banned in the production of pianos but the Hybrid grand action features some materials that feel just as tactile, if not better.

The LX708 allows you to adjust the physical vibrations that you might be used to playing an acoustic upright or grand. This incredible feature is evident even when practicing on headphones (all models feature multiple headphone outputs) and is just another thing that highlights the incredible feel of the LX700 Series - making you feel like you are playing on a concert grand piano in your living room. Roland’s Responsive Damper mechanism on the LX708 gives you total control and the same response as on a grand piano so you can channel the sympathetic resonance of the strings or ‘half pedal’ as accurately as you would on an acoustic Grand Piano.

Play where you like with the ‘My Stage‘ feature that all the LX 700 series features. My Stage offers a choice of tone collections, each perfectly matching the piano to its venue location for an incredibly immersive experience. For example, ‘Piano Recital’ lets you hear what it sounds like to play a European grand in a large concert hall, while Jazz Club lets you try an American grand in a smaller lounge with completely different acoustics.

The last feature is something that changes what a Digital Piano is... Bluetooth audio connectivity has been added to the Roland LX700 Series to turn your instrument into a full multi-channel sound system! The connectivity via Bluetooth, bundled with the new 'Piano Every Day' app gives you the latest and greatest feature set the world has ever seen in a digital piano. Forget what you knew - Roland have changed the way we will interact with digital pianos forever.